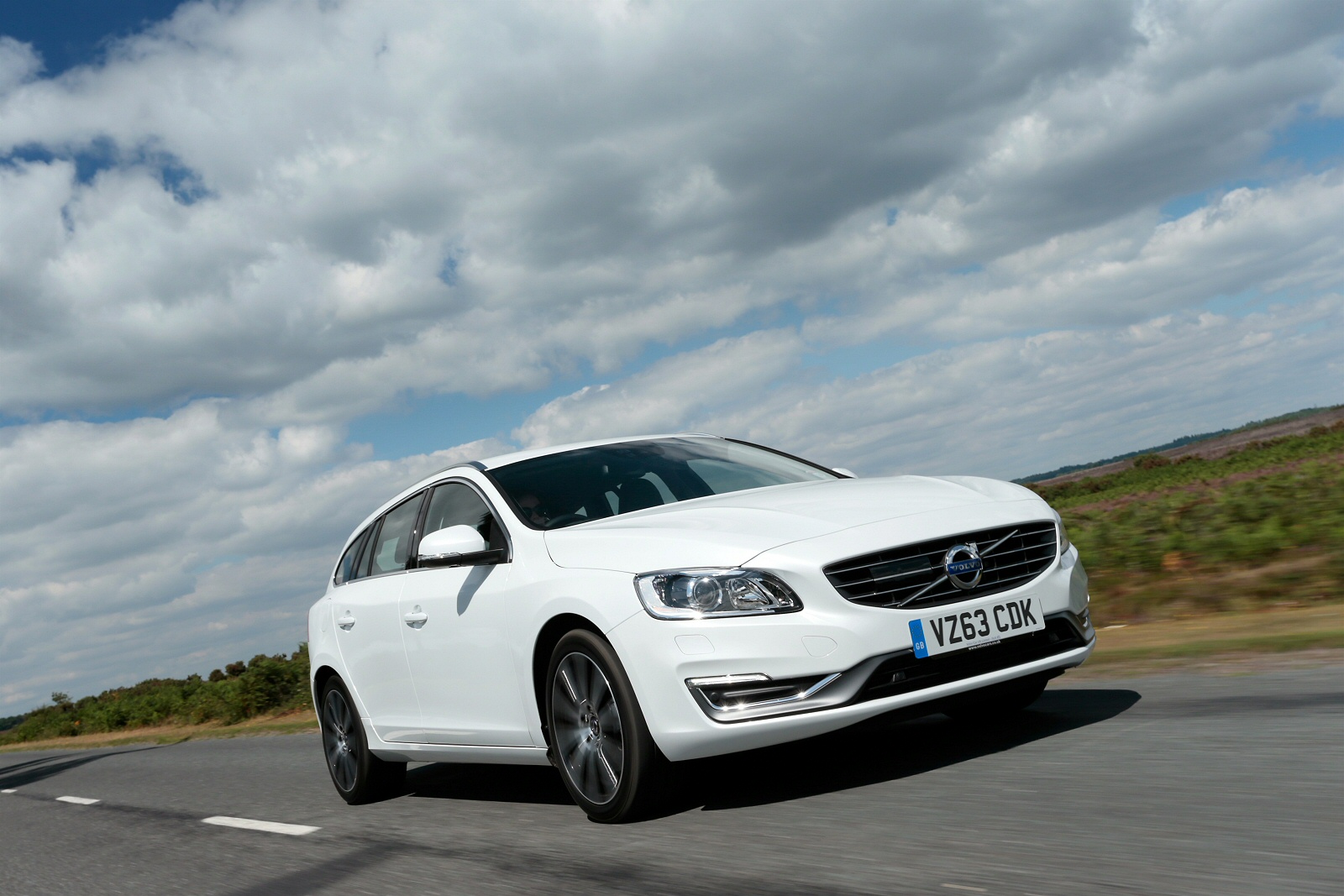 If your mental image of a Volvo estate is a rather thirsty box on wheels, this improved V60 D2 model might well come as a revelation. Sassily styled and capable of returning 62.8mpg from its 1.6-litre turbodiesel engine, this V60 has proven an instant hit with company car driers due to its 119g/km CO2 emissions.
Background

There’s something resolutely modern about the Volvo V60 D2. It’s almost as if the touchy-feely corporate image that Volvo liked to portray for so many years has finally aligned with environmental Zeitgeist to make its products more relevant than ever. A Volvo estate used to say that you cared about the people inside. Now it states that you care about people outside too.
Volvo has been quicker than most companies to recognise the importance of low emission vehicles across its line up and the D2 badge is affixed to those models in each particular product line that offer exceptionally low emissions and exceptionally impressive economy. The V60 D2 adheres to Volvo’s belief is that economy shouldn’t come at any detriment to the driving and usability of the vehicle, therefore the interior and versatility of each D2 models doesn’t differ from other variants.
Driving Experience

With 115bhp on tap, it’s fair to say the V60 D2 won’t have you reminiscing about the classic 850 TS touring car racers, but nor does it mean you need a sundial to measure your progress to 60mph. The D2 will detain you for just 10.7 seconds for the benchmark sprint and run onto a top speed of 118mph. The peak torque of 270Nm arrives at just 1750rpm, so the engine feels a good deal more muscular than its modest cubic capacity might suggest.
Advanced Stability Control is standard, as is Corner Traction Control which acts like a limited slip differential to control understeer when cornering. The manual six-speed gearbox fitted to this V60 D2 isn’t the slickest item I’ve ever used but it’s far from vague and coupled with a great pedal box, it means the Volvo, despite its moderate power output, is actually quite good fun to drive. Body control is fine and refinement at typical motorway speeds is very good.
Design and Build

Lots of people will have a clear picture in their head of what a Volvo estate looks like but the V60 is quite a departure from that. It employs what Volvo calls its ‘racetrack’ design with the lines of the car flowing organically into each other like the curves of a race circuit. Boxy it ain’t.
Changes to this latest version are subtle. A redesigned bonnet incorporate extra flowing creases, while the revised headlights incorporate a cornering function and an auto-dimming main beam. There’s also a revised bumper with extra chrome trim – and daytime running lights. You’ll find a sleeker rear bumper too.
At the wheel, where you sit a bit lower than in most other Volvos, there are few changes apart from a redesigned auto gearbox shifter, the emphasis remaining on the kind of cool Scandinavian design that IKEA fans will like very much. The signature Volvo ‘floating’ centre console is present and correct, angled in this model more towards the driver for a more ‘cockpit’-style feel.
The boot is 430-litres, which is just under 100-litres up on the S60 saloon but less than you’ll cram into compact executive estates like the BMW 3 Series Touring and Audi A4 Avant. Volvo points out that there’s more to practicality than sheer load volume and it’s got a point. The V60 load area has been designed with a wide aperture of 1,095mm and a uniform shape, so all of the available capacity can be used. The rear bench splits 40/20/40 and drops down flat to the floor, while the front passenger seat can do likewise to further increase luggage space.
Market and Model

Coupled with its S60 saloon sibling, the V60 has struck a chord with British buyers. This D2 model will doubtless cement its popularity still further. Unlike many efficiency variants, the D2 badging isn’t affixed to a poverty-spec base model with naff plastic wheel trims and a dodgy spoiler kit. Instead, Volvo offer the D2 across all trim levels with a huge choice in the amount of options packs you can fit to it.
The excellent City Safety technology that can automatically warn the driver and, ultimately, apply the brakes if it detects an imminent collision, is standard. There’s also an optional Pedestrian Detection function that keeps an eye out for people stepping in front of the vehicle. Seatbelt pretensioners are fitted to all seats and a full array of airbags is standard. Technology features available on the V60 include the ACC Adaptive Cruise Control system that can maintain a set gap to the vehicle in front, a parking assist camera with front and rear sensors and a further camera on the front grille to help the driver see out of bind junctions. The specially developed infotainment system brings the various functions together on a five or seven inch screen mounted high on the dashboard.
Cost of Ownership

The Volvo V60 D2 concept is all about minimising emissions and fuel consumption. With emissions of 119g/km and a combined fuel economy figure of 62.8mpg, that mission is firmly accomplished. Residual values look set to be extremely good, although the fact that many Volvo buyers spend quite freely on options packs may well mean that the residual figures aren’t quite as impressive as they first appear.
With a fuel tank of 67.5 litres, this Volvo’s touring range is, in theory, over 930 miles, which will allow you to adopt a decidedly relaxed approach to continental road trips. Even around town, the fuel consumption figure stays above 61mpg. Who needs hybrids anyway?
Summary

Just about the only negative aspect of the V60 D2 is the nagging concern that in handsome top of the line R-DESIGN trim, it starts to look a bit of a sheep in wolf’s clothing. You don’t have to have that of course and in any case, if this represents the most worrying aspect of V60 D2 ownership, it’s safe to say that Volvo has created a thoroughly thought out, well-rounded car.
Any car that can do so much so well has to be an appealing prospect and the D2 derivative is a deservedly popular one amongst V60 buyers. The old S60 model was always a nearly car that couldn’t trade on even terms with the likes of the BMW 3 Series and Audi A4,hobbled also buy the lack of an estate variant. This time round, Volvo has a really strong saloon and estate combo in the shape of the S60 and V60, and although this V60 D2 isn’t the most capacious estate you’ll find in its class., it’s nevertheless a solidly practical vehicle given its tiny thirst and saintly emissions. Its time has come.